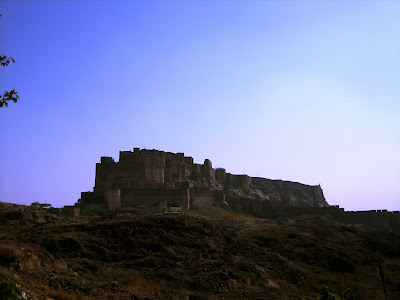 January 26, 1950: India’s Constitution came into force, and India became a republic. Since then, January 26 is national holiday: Republic Day.

After a neverending trip by train (15 hours, including three hours of inevitable delays), Jodhpur appeared to us almost as a mirage. In the middle of the desert, the view of Mehrangarh - the fort that dominates the old city of Jodhpur - is terrific. The massive walls appear to be all in one with the rock from which they rise. And as you approach the fort, you can't avoid to feel a bit intimidated.

But as much as frightening the fort appears from the outside, equally enchanting the maharaja’s palace looks from the inside. Skilfully fret-worked walls, coloured windows, beautifully decorated interiors... the best that Marwart art can offer.

We left Jodhpur only after few hours to be able to reach Jaisalmer by the night, but very happy to have chosen to stop in this city during our trip.