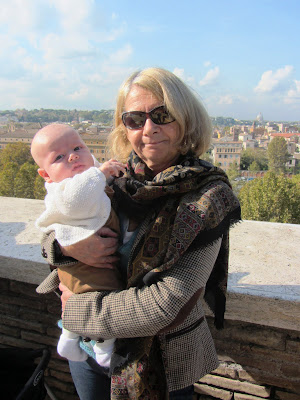 Everyone must have his or her guardian angel. Simply, we often are not able to recognize him/her. They say that it’s because guardian angels work better undercover. Goodness knows…

But in the case of Mathilde, it has been relatively easy to spot her guardian angel. Every time I leave on mission abandoning the family, she suddenly appears, apparently directly from Paris - but I do start suspecting that Paris is just a cover, and that in reality she comes directly from the sky.

But ‘sky’ or ‘Paris’ it makes little difference in the end: the point is that every time I leave on mission abandoning the family, she suddenly appears to keep Mathilde company and to support her during my absence.

And so it happened this time as well. And as every time she comes, I won’t be able to meet her at my return, as she will be already left. Back to Paris. Or to the sky. Because guardian angels prefer not to appear too much…

I thus can’t do anything else than to thank her through the Blog. Thank-you guardian angel, thank-you Veronique… 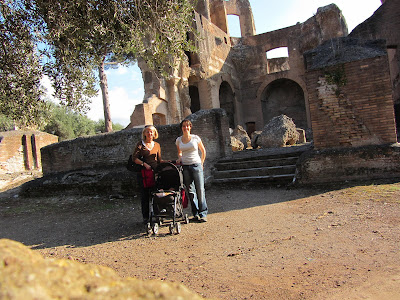 Another Japanese delegation in Rome (via Delhi and Wien) 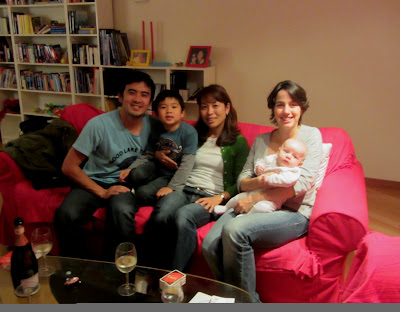 This time the Japaense delegation comprised not less than the whole Ono’s family: Toshi, Saki, and Yuta - good friends of us in Delhi, who left India and moved to Wien more or less at the time when we moved to Rome.

I am very sorry to have missed this rendez vous in Rome, and hope I will have the opportunity to see you sometime soon (perhaps in Wien in April on the occasion of the Wien marathon???).

Posted by Unknown at 1:07 PM No comments: 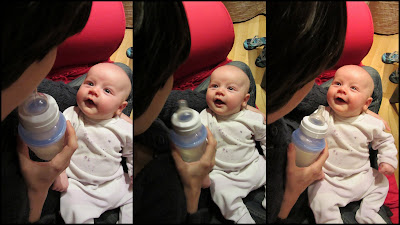 While here in Kabul the atmosphere is not too rosy* (but don’t worry, I am fine), I am thinking to the reward that is waiting for me in Rome…

Posted by Unknown at 5:31 PM No comments: 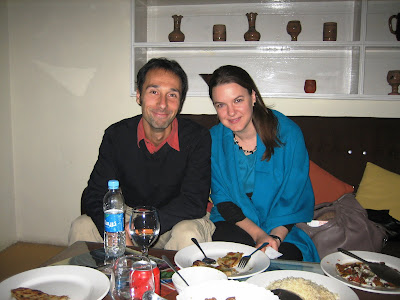 It’s a small world. But we already knew it… 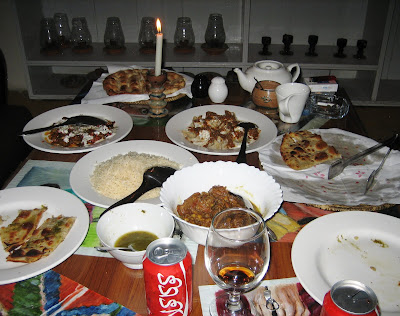 A typical Afghan dinner
Posted by Unknown at 11:30 PM 2 comments: 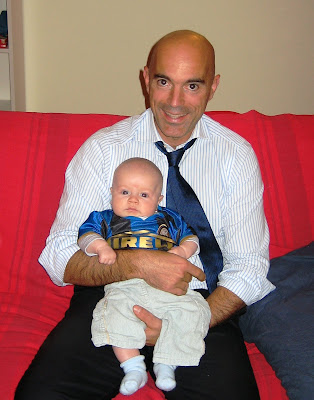 A doctor, an engineer, a lawyer… perhaps the president of the republic! It must have occurred to everyone to daydream about the future profession of your child…

But as much we wonder what Leonardo will do when he will be a grown up, as I wonder which football team he will support…

I wish, of course, he would eventually support Inter Milan. The French branch of the family probably wishes he could become a supporter of Paris Saint Germain. The baker in Testaccio already sees Leonardo in the ‘Curva Sud’ of the Olympic Stadium in Rome cheering AS Roma - and he has already started brainwashing Leo: every time I go to his bakery with Leo, he says goodbye to us by saying: “Ao’, Leona’, me raccomando, forza Roma!” (Hey, Leonardo, don’t forget, come on Roma!).

To be consistent with my liberal principles, I should accept that the choice of the team to support is individual - and should accept whatever choice Leonardo will make.

True, but in the meantime a little hint* doesn’t harm…

(*) Thanks to Davide and Andrea for passing Leo the ‘baton’…

I had asked (and was granted) not to travel during Leonardo’s first few months - and have enjoyed this period of family and Rome very much.

But I knew that this ‘idyllic life’ would have concluded sooner or later.

Well, that day has arrived, and yesterday, unfortunately, I started travelling again.

Back on the road 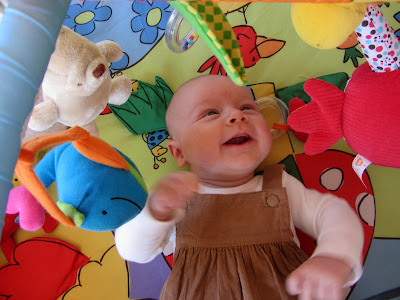 In the past two weeks Leo has begun to sleep all night long: he usually falls asleep around 11-11.30 pm, and he wakes up around 7 am.

Considering the stories we heard from other parents, we can’t certainly complain, but… can someone tell him that during the week-ends he is allowed to sleep a bit longer??? 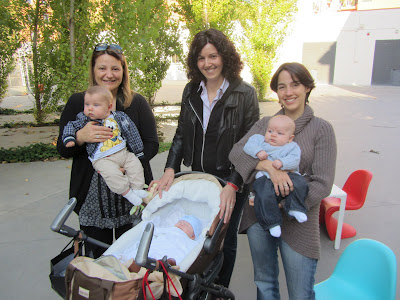 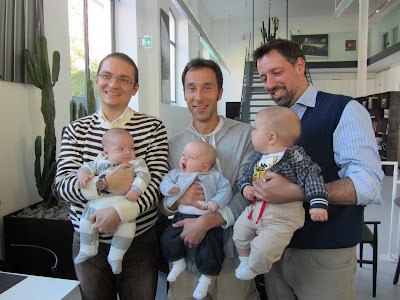 Leo and his friends 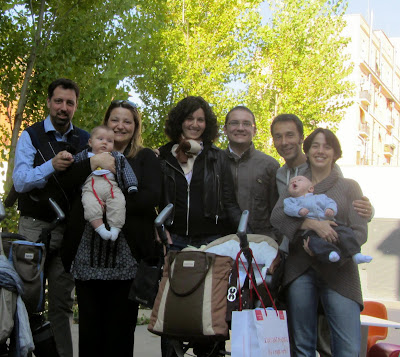 Do you remember when we announced that Leo (at the time still ‘Baby’) was not yet born, and he already had plenty of friends? (click here if you don’t remember…)

Well, today we finally managed to have Leo, Duccio, and Riccardo meeting.

(Ps: we take this opportunity to also announce the birth of Federico, today in Milan. Welcome Federico, and best wishes to Maura and Stefano!) 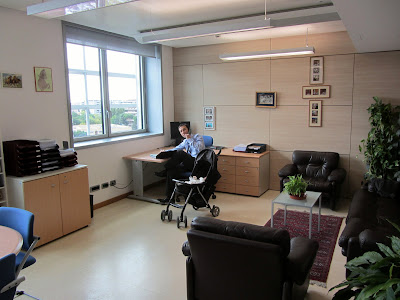 I tried to guess why the choice fell on me. And I could find only one explanation… 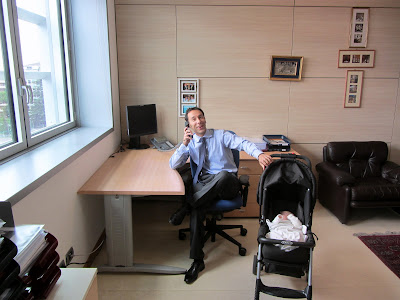 Posted by Unknown at 5:44 PM No comments:

Apologizes for being a bit repetitive on this subject, but we have really been besotted with Leo’ smiles in the past weeks…
Posted by Unknown at 11:44 PM 2 comments: 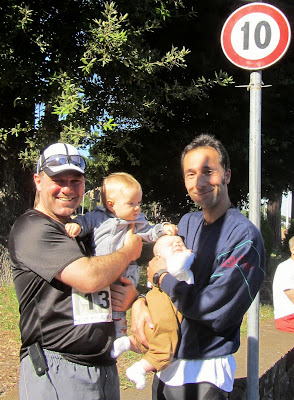 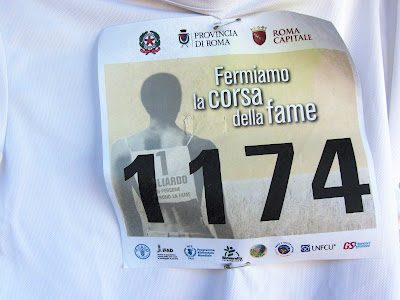 With hindsight, I think one of the (rational or irrational) fears of becoming father I had was to see the time I used to have for myself drastically diminishing - till (eventually) disappearing. In particular, I was afraid of not having time anymore to play sport, my hobby and safety valve…

Interestingly, the first day back to office after my paternity leaves I discovered there is actually an IFAD running group, who meets every lunch break and goes running in the neighbourhood.

Half in jest, half in earnest I decided to join the group, and since then I have been running at least twice per week with them.

And on Sunday I had my first competition: the ‘Run for Food’ - a 10 km competitive race to raise awareness and collect funds to fight against world hunger.

And well, to my own surprise, the race went better than expected. A boost to continue training - till the final goal: the Rome Marathon in March 2012… J 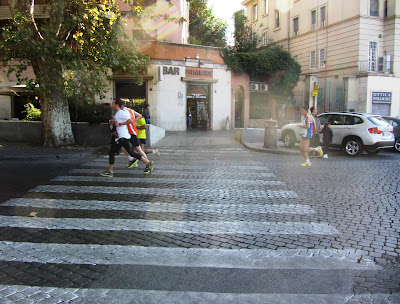 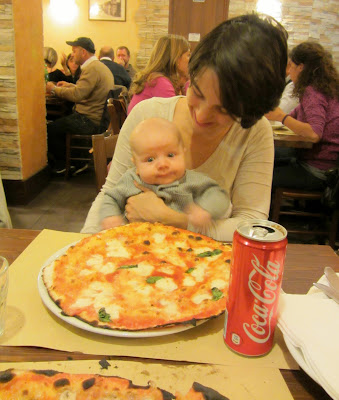 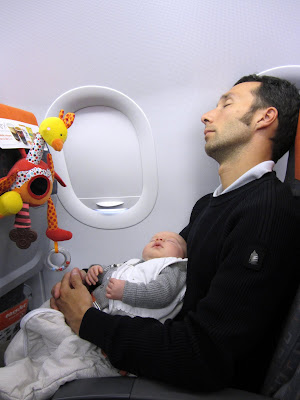 If not exactly blonde, certainly light brown. Grey-blue eyes. Well, cannot say I ever called into question whether Leo was really my son, but cannot deny that at one point I began having a slight doubt either.

But it has been sufficient to enter in the plane with him and see him falling asleep in the twinkling of an eye as soon as we sat, that I immediately recognized the very same genes.

No need for a DNA test: Leo is certainly my son! 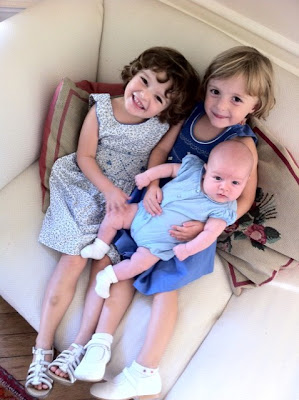 Back from Paris. The week-end that just concluded has been a family week-end in all respects: brothers, sisters, uncles, aunties, cousins, and - of course - Pasha and Masha.

Unfortunately we just realized we didn’t take even one single family picture.

To remedy to such deficiency, I post today a family drawing instead - by Victoire, one of Leo’s French cousinettes. And although the drawing does not portrait the whole family, it does however include a good part of it.

The people that appear in the family drawing can be easily guessed, but I will guide you through the drawing nevertheless. 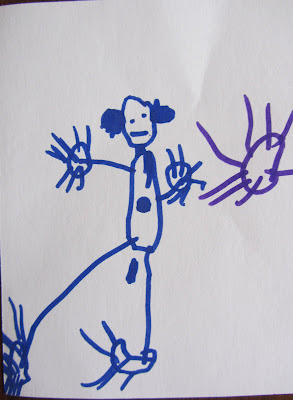 The character above is clearly me, easily recognizable from the sideburns.

Below there are Mathilde and Leo, portrayed during Mathilde’s pregnancy. Please, note the resemblance with his dad.

And in the corner the author, Victoire, and her twin sister, Hortense. 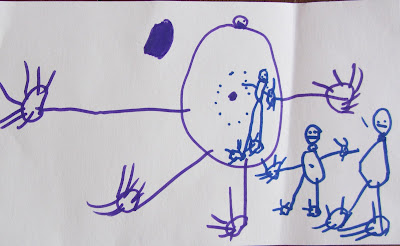 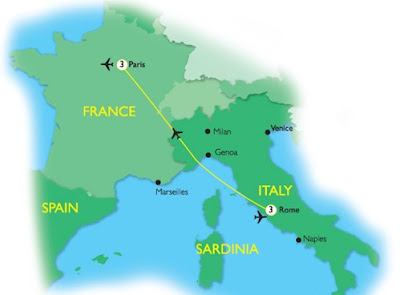 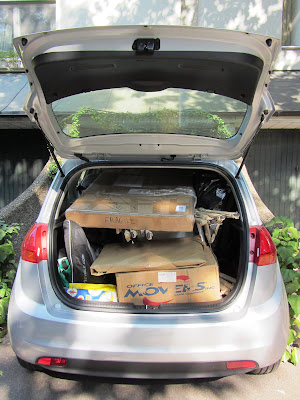 Geneva, Bogotà, Addis, Bruxelles, London, Paris, Washington, Delhi, Rome… An ‘itinerant’ life, as ours, has certainly many positive aspects. But some drawbacks as well.

One of the drawbacks is certainly the number of things that you end up accumulating at every place you stay, and that you have to move when you relocate.

I always tried to ‘travel light’, but evidently this has not been sufficient, and I could not avoid accumulating over time kilos and kilos of stuff. Which, at every move, were regularly placed in boxes that were either brought with us or kept safely for ‘when we will be back’.

But this turned out not being an efficient way of managing my items. At one point in time I had boxes in three different continents, and every time I was looking for something - be it a book, a document, or a garment - I didn’t know where I left it. In many cases I had everything in double: two pairs of football boots, two climbing ropes, two sets of ski gear…

Anyway, before my last move to Rome, not knowing exactly where I would have lived, I sent all my stuff to Milan, and stored them in my mum’s garage. At least - I thought - they are all in one place. And there my boxes remained during all these months.

But in the past weeks I received quite explicit signals that time had come to free some space in the garage. And so my trip to Milan ended up being a new move.

Well, at least you have all your stuff with you in Rome, you would say. Yes: two pairs of football boots, two climbing ropes… 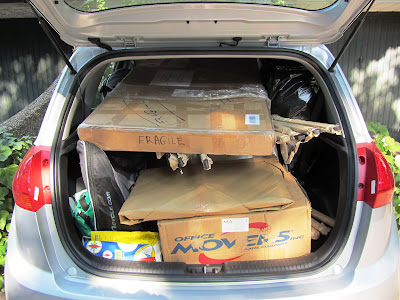 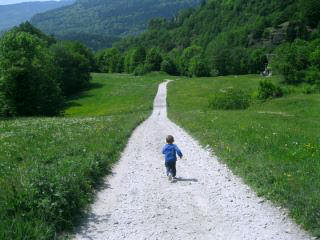