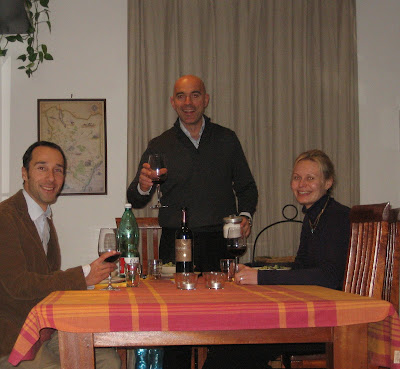 I met Francesco for the first time in Turin in 2000, at the JPO Induction Course, and I felt immediately at my ease with him. Francesco is in fact one of those persons that always puts you in a good mood. In his company I can't refrain from laughing heartily.

Francesco and I met again a few months later in New York, at another training course, and for three weeks we basically spent 24 hours/day ‘culo e camicia’, as we would say in Italy (as thick as thieves). For the following three years we met a few times in Kenya and Ethiopia, the countries where we were working respectively. After I left Ethiopia in 2003 we lost a bit track of each other, but when in 2005 I went to IFAD for a few meetings I met him again. He had left Kenya the previous year, and moved back to his hometown, Rome. Since then we managed to keep in touch, and managed to meet once or twice per year, either in Rome or Washington.

During our meeting in Rome in 2005, Francesco mentioned me he had bought an old mansion that he was restoring. And every time we met afterwards, Francesco used to update me on how the works were advancing. Apparently this mansion was beautiful: in the middle of a national park, surrounded by nature and deepened in the silence. When a couple of years after the house had finally been finished, Francesco didn’t miss an occasion to remind me I should go and visit it. But then, mysteriously, every time I had the opportunity to go, for a reason or another, the invitation was skipped.

To the point that I started doubting that this house was actually existing. ‘Perhaps he still leaves with his parents and he is too ashamed to confess it’ I thought.

Anyway, today Francesco finally invited me at his home, and have to say that, first, it actually exists. And second, that in fact it is very nice indeed.

I also finally met Linda, Francesco’s fiancée - another character whose existence I started seriously doubting, as Francesco kept on talking about her and telling me I should meet her, but then, for a reason or another, he always skipped introducing her to me.

Anyway, besides the excellent pasta, the delicious roasted turkey, and the exquisite wine, the good feeling of tonight was given by the sensation of having found a couple of persons with whom we may get along during our stay in Rome…