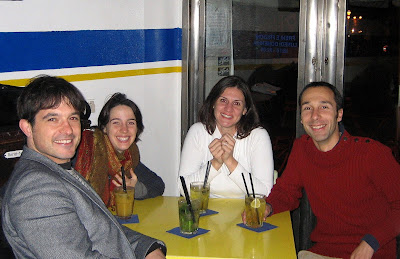 Considering that the visits of Chiara, mamma, and Agnes and Xavier in the past weeks could not be properly considered visits to les M&M’s, as Mathilde had not yet arrived, the award for the first official visit to les M&M’s goes to Lili and Marc, who - directly from the Hague - managed to meet us less than 12 hours from Mathilde’s arrival!

Lili is an old friend from the times of Addis, almost a sister. After the experience in Ethiopia, we managed to keep in contact and to see each other quite regularly in 2004, when we were both studying in the UK: Lili in Essex and I in London. After the UK we took off in two different directions: Lili towards East, and precisely to Afghanistan, and I towards West, tossed between Washington and Africa. And for almost seven years we didn’t see each other. But these friendships are well grounded, and even if you don’t see each other for years, whenever you meet again it seems that time has not passed at all. And so it was…

Marc is a new entry, but as all the Dutch he inspires a natural liking. We had the good feeling we could get along.

Lili and Marc left on Monday, but we had the feeling we will see them often in the near future…

And now that the award to the first one who met les M&M’s in Rome has been assigned, who will gain the award for the first guest at les M&M’s???