Post of solidarity to the demonstrations in favour of women's dignity 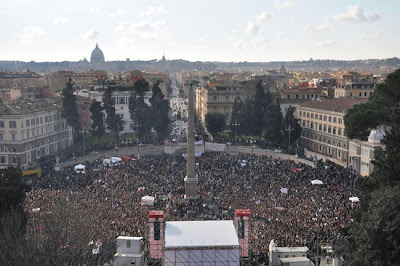 Yesterday big demonstrations to defend women dignity all over Italy - demonstrations that soon turned into a demonstration against Berlusconi. It is estimated that about one million people, both men and women, participated.

Our Blog expresses its solidarity for this cause by reporting the following little story...

They say that when God created the world, He decided to grant two virtues to the people, so that they could prosper.

So He made the Swiss tidy and respectful of the laws.

The English persevering and fond of study.

The Japanese hard worker and patient.

The French learned and refined.

The Spanish merry and welcoming.

When the turn of the Italians came, God said to the Angel who was taking note of His will: “The Italians will be intelligent, honest, and belonging to the ‘Popolo delle Libertà*’”.

When God finally concluded the creation, the Angel told Him: “My Lord, you gave two virtues to all the peoples, but three to the Italians! This would make them prevailing over all the other!”

“Oh my God - God said - that’s true! But you know, my dear Angel, that you cannot take out divine virtues once they are granted. Let the Italians have three virtues then, but let’s make sure that each of them cannot have more than two at the same time…”

And that’s how it came that:

- The Italians who are honest and belong to the Popolo delle Libertà cannot be intelligent;

- The Italians who are intelligent and belong to the Popolo delle Libertà cannot be honest;

- And the Italians who are honest and intelligent…**