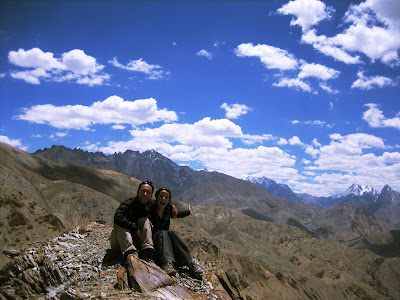 It is difficult to condense two weeks of dramatic landscapes, breathtaking views and strong emotions in just a few lines. But one thing is sure: I have never seen a place like Ladakh.

Arid plains surrounded by sand-like mountains which contrast a crystal-blue sky. Basically Ladakh is a high-altitude desert (rarely below 3,500 and often above 4,000 m) where the Himalayan peaks and the gorges caved over the centuries by the glaciers and the rivers produce a surreal landscape.

But within this dramatic and apparently inhospitable environment, patches of an intense, almost phosphorescent green suddenly appear - almost by a miracle. That’s where the Ladakhi farmers after centuries of struggles against the harsh environment managed to laboriously channel the water from the mountain streams, and make some small plots of land fertile. And the visual impact is terrific.

And while writing these lines, one regret: that none of our pictures, clips, or descriptions could even closely reproduce the beauty of this incredible land...