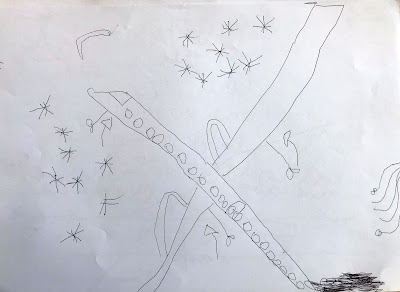 Many of my "generation" do certainly remember their first flight.

Mine was a Milan-Rome in a grey day of February 1984 to celebrate my tenth birthday. I do keep vivid memories of that day, because - in fact - in those times, flying was somehow an "exceptional" event.

Different times, different generations: Leo and Tommy have already flown plenty of times: Leo for the first time when he was one-month old. I can't remember exactly when was Tommy's first flight, but it was certainly within his first year of life.

Yet, there is always something "magic" in taking a plane, and despite Leo and Tommy are seasoned frequent flyers, they are always somehow excited when they have to take a plane. Moreover, this time was the first time they had an intercontinental flight…

Only times will tell.

However, what is posted here is what remained the day after.

The drawing above is Tommy's. What I like is that he captured the fact that we left in the evening, we flew over night, and we arrived in the morning - as suggested by the small sun on the left edge (sorry, it is a bit out of the picture - I will take a new picture of the drawing and post it again ).

I am not sure what the five lines on the right edge are. One interpretation (comparing with Leo's drawing below) is that this could be the logo of Air China.

The drawing below is Leo's. I like the Air China logo on the tale of the plane, the writing "Air China" on the body of the aircraft (both in Latin characters and Chinese ideograms!), and the fact that he captured (with some irony?) the fact that we were sleeping…

I also like some of the details that captured his attention, as only the eyes of a child can do: the fuel couplings on the wings and the hold door for the luggage on the body of the plane.

If this Blog will be still up and running in 38 years, we will be asking Leo and Tommy what memories they keep of this night. But for the moment we do have a clear evidence that this flight, even if not the first one, even if not the last of this kind, has hit their imagination… 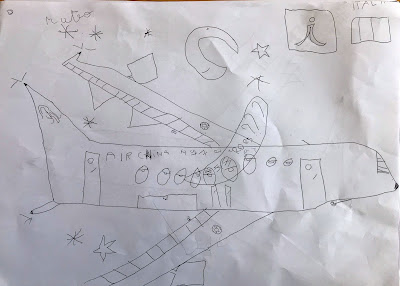