The Indo-Pakistan flag-lowering and border-closing ceremony 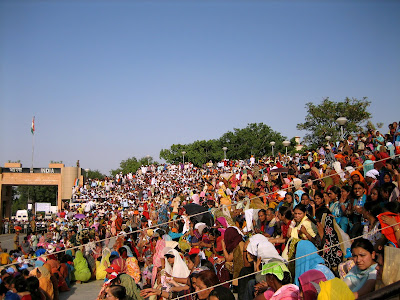 Cheering public at the Indo-Pakistan border

We conclude the brief reportage of our week-end in Amritsar by describing the event that entertained us the most: the flag-lowering and border-closing ceremony at the Indo-Pakistan border.

The event fulfils so much the patriotism of both countries that thousands of people, on each side of the border, flock every day to be present at it.

And the ceremony has become a real happening, something in between a concert and a sport event. Already a few hours before the event, the stands that have been constructed to accommodate this crowd are packed with people that, in a crescendo of enthusiasm, sing patriotic songs1 , wave Indian flags, and rhythmically cheer “Hindustan, Zindabad” (Long live Hindustan)2 - to which the Pakistani crowd on the other side of the border respond by singing “Pakistan, Pakistan!”.

It’s a competition between who makes more noise - until when a squad of soldiers, preceded by a long bellow from a soldier appointed for this task only, steps in and, in a mix of pompous colonial and funny goose-step styles, parades up and down in front of the cheering public3.

Then, one by one, each soldier marches aggressively (or comically, it depends on the point of view) towards the border, likely with the intention of intimidating the Pakistani soldiers that - from the other side of the border - are doing exactly the same, i.e. aggressively marching towards the Indian border one by one to scare the Indian soldiers4. Once the two soldiers meet face to face on the border, they spend a few instants threateningly looking at each other: chest out, fists clenched, and eyebrows knit - but without ever crossing the invisible line that divides India from Pakistan.

The ceremony concludes with the lowering of the Indian and Pakistani flags. The flags are simultaneously lowered and the process takes forever, as the soldiers responsible for this task have to be extremely careful that either of the two flags is at any point in time lower than the other5.

Once the flags are lowered, the most intense moment of the whole ceremony: the commanding officers of the two countries shake their hands before the gates are shut (but this happens so quickly that it’s easier to miss it than to notice it6).

Then the gates are shut, and the border is closed for the night. 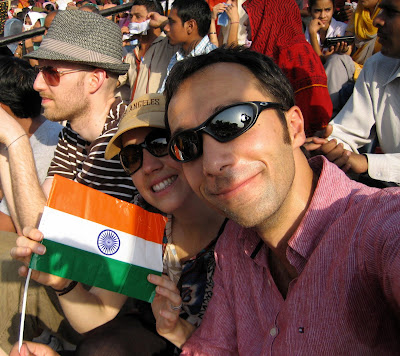