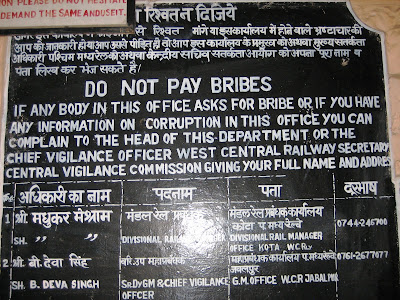 In one of our past posts, one of our good readers told us that he learnt more about India in the past three months reading our blog than in his entire life.

While certainly flattered, I have to say I feel quite the opposite, i.e. I have the feeling that three lives would not be enough for me to really understand India.

Vishnu and Shiva, Islam and Sikhism, the British and the Mughals, Ghandi and Kashmir, the ‘biggest democracy of the world’ and the cast system, 9% GDP growth and 50% of the population below poverty line, the world’s first woman prime minister and the widow’s ashrams, thousands and thousands of students sent to study in top universities worldwide and arranged marriages... as soon as you have the feeling to have finally understood something, there is suddenly something else that contradict your belief, and you end up as confused as before**...

Bribing. Bribing is another of those things that it is impossible to understand if you are not Indian. Officially punishable by law, socially accepted: it is very difficult to understand when it is a social norm, necessary to 'speed up' things (a ‘shadow cost’, as an economist would define it), and when on the contrary it is a real abuse of power.

An example. We were about to purchase a train ticket from Jasailmer to Delhi, where we spent a week end with our friends Riccardo and Patricia. Unfortunately there were not four seats close to each other anymore, and the only available option was to purchase two tickets in second class and two tickets in third class. No problem, we thought: once we are on the train, we’ll ask Riccardo and Patricia's neighbours in third class if they mind to exchange their seats with our two seats in second class. Who would refuse a free upgrade?

And that’s what we did: we asked the two neighbours in third class if they wanted to exchange their seats with ours in second class, and of course they were very happy to do so.

However, after some time, they came back to their original seats telling us that the ticket inspector didn’t allow them to sit on our seats. No problem, we thought: we’ll go altogether to explain the ticket inspector that we deliberately exchange seats to sit close to our friends.

With our great surprise, the inspector didn’t want to hear us, keeping on repeating that it was not possible to exchange seats in two different classes. Despite our insistence, he was inflexible. With great disappointment we thus returned to our second class seats.

The interesting thing is that Mathilde and I gave two opposite interpretations on the inspector’ stubbornness. In my opinion the ticket inspector was playing hard expecting a little bribe to allow the exchange - bribe that of course we didn’t give. For Mathilde on the contrary the inspector was afraid of being unjustly suspected and accused of having received a bribe to have allowed two passengers moving from the third to the second class - bribe for which he could be liable to prosecution.

Of course we’ll never know what the truth was, but this episode gives you a good example of how difficult is to understand the unwritten rules of this country, to penetrate into the social norms of this society, to behave correctly according to the situation in this mishmash...

And you, just for curiosity, how would you have interpreted the inspector’ stubbornness?

(**) I take this opportunity to signal an article that was recommended to me by Emanuele some time ago, and which well describes this strange feeling of ‘everything and its contrary’ that I am experiencing here in India... (http://www.nytimes.com/2010/03/15/opinion/15iht-edsebastian.html?scp=1&sq=tim%20sebastian%20&st=cse)