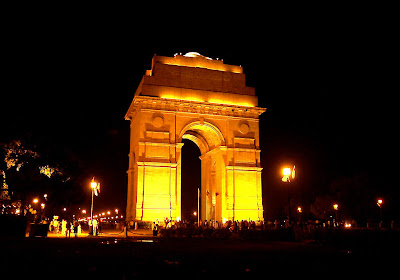 Earth Hour is a global campaign which began a few years ago to raise public awareness about climate change. During the ‘Earth Hour’, individuals and municipalities worldwide are invited to switch off the lights for one hour to save energy.

Here in Delhi, the event was celebrated at the Indian Gate, one of the main landmarks of the city. During a tedious ceremony, the authorities on duty switched off a gigantic switch which should have symbolically switched off the lights of the Indian Gate and of the entire city. The turning off of the gigantic switch was preceded by pretty boring and empty speeches. In sum, all quite disappointing.

However, the evening was far from being a waste of time. On the contrary, it gave us the opportunity to make a new discovery. During the hour in which the lights of the city were off in fact, an Indian group that we didn’t know yet performed a concert by candlelight.

The Indian Ocean, that was the name of the group, is an Indian band that plays a mix of a newageish-fusion-traditional-jazz-&-blues music: electric sitar, guitar, bass, drums and percussions. Some of the songs reminded me those of the Tazenda (ve li ricordate???), but beside this vague association of ideas, we found this group and their music pretty original.

I looked for them on Youtube, but didn’t find many videos of them (but have a look at this just to get an idea of the kind of music they play: http://www.youtube.com/watch?v=R0gxeUnP44I - or, if you have more time, click on “Launch Radio” on this site: http://www.indianoceanmusic.com/susmit.htm).

Anyway, you know what? Tomorrow I am going to look for their cd!