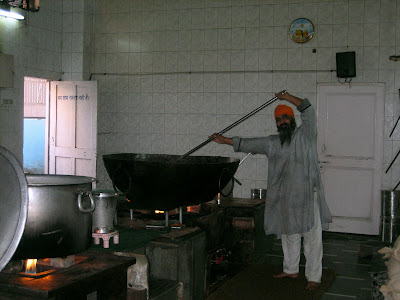 Over the week end we visited the Gurdwara Sis Ganj Sahib, one of the most prominent Sikh* Gurdwara (or Sikh House of Worship) in Delhi. Situated in Chandni Chowk, at the heart of Old Delhi, this temple is easily recognizable for its golden domes that tower over the surrounding market.

Recommended by a friend of us, we were not, telling the truth, particularly impressed. What struck our attention instead was the attached refectory: a huge dining area where about 30,000 people (irrespective of their religious beliefs) are offered a meal every day. You just need to enter and sit, and someone approaches you asking what you would like to have.

And we did: we entered, we sat, and we were offered a chai (masala tea with milk, the Indian specialty) - which I politely declined, but Mathilde accepted it, liked it, and is still alive. We visited the kitchens, we entertained with a few people sitting close to us (always curious to see a foreign penetrate that ‘deeply’ India), we felt for half-hour ‘true Indians’…

In sum… who said that the most interesting part in a temple is the temple itself?

(*) For more information on the Sikhism, have a look at: http://www.matteoandmathilde.org/2009/11/guru-nanak-jayanti.html 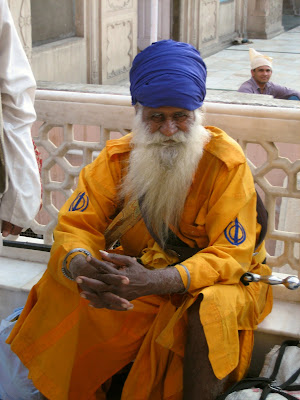