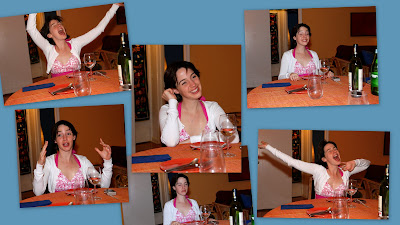 Unavoidably, most of the posts in our Blog tend to be a bit Matteo-centric, or, at least, tend to reflect my personal point of view on most of the things that we observe and that happen to us. However, I don’t want to undervalue - and on the contrary, I would like to publicly acknowledge - the role that Mathilde has in this Blog.

First reader, sometime censor, but more often silent supervisor, she watches over me playing with my new toy as a parent watches over his or her child playing with other children in the playground: distant but always present. And for this reason, I would like to write for once a post for Mathilde. On Mathilde.

Mathilde and India. If it hadn’t been for her, we probably wouldn’t be here.

Fragile and at the same warlike in nature, Mathilde approached India (as life in general) like a storm (or like a monsoon if you prefer) - a burst of enthusiasm, determination and emotional potential. With only one moment of weakness: the second day in Delhi, when she complained of not having friends yet. But from the third day onwards she has been a river in flood. Was she missing Padma? Well, she found Prerna. Was she afraid that her telecommuting arrangement with CI could be perceived as a non-deserved privilege? She tirelessly worked every day from 6 pm to 12 am (and often beyond); she didn’t miss a single team-meeting, a single teleconference - indifferent to the time difference. Was she bored in the morning while I was in the office? She first enrolled in an Indian-dances class, and then - not happy with that - she joined a Yoga Ashram and became a disciple of Shivananda. Was she still feeling somehow not fully productive? She started volunteering for an Indian NGO three days a week, she became the right-hand man of the CEO, and she received a job offer just before she left to France last week.

But as a rose, that despite the thorns is yet fragile, so Mathilde tightly holds my hands every time we take-off or land, locks three times our door and can’t sleep if I am out on mission, desperately looks for a hug if we discuss about the future…

And as far as I am concerned, as a constant gardener, I try to take care of my rose, regularly manuring and watering her so that she keeps both her pointed thorns and her delicate fragrance. Because there is no rose without a thorn.