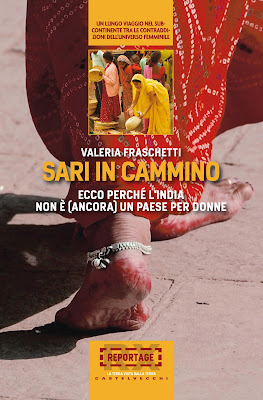 In the past months the name of Valeria appeared more than once on this Blog.

A very good friend of us in Delhi, where she was working as a free-lance journalist, she moved to Rome more or less at the same time of us (you may remember our joint farewell party in Delhi), and represented a sort of reference point for us in this new city.

However, even if her name appeared more than once in the Blog, we realized that we have never ‘formally’ introduced her.

What a better occasion to introduce her to our readers then than through the book she wrote while in India (‘Sari in Cammino’), and that she officially presented a few days ago (Leo, Mathilde and I were of course in the front row!).

‘Sari in Cammino’ is a book that, through a series of interviews to different Indian women (a 12 years old child who refused an arranged marriage, a Muslim boxer who dreams to participate to the Olympic Games to emancipate herself, an untouchable who works as a journalist for the first newspaper in India owned, managed, written and distributed by untouchables, a Bollywood star, a lesbian, an activist of an Hinduism fundamentalist group, a successful fashion designer, the CEO of one of the major biotechnology enterprises in Asia, a local politician and many others) provides a portrait of today’s India and of its contradictions.

Having emotionally participated to the drafting of this book, witnessing the enthusiasm with which (but also the challenges through which) Valeria carried out this task, and having listened ‘first-hand’ to the accounts of the interviews, the early drafts, etc. we felt very proud for her.