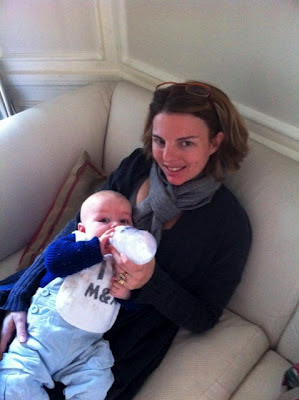 I remember I was once flying from Africa to Europe, and I ended up in a flight with about thirty African kids, between four and eight year sold.

I couldn’t be more wrong. During the eight hour flight I could not hear a pin drop. All the kids have been quiet at their seats for the entire duration of the flight, sleeping, playing with a toy, or reading something. Not a scream, a moan, or a complaint.

Since then I have become a profound admirer of the African educational system. To the extent that I promised myself that whenever I had had a child, I would have sent him or her every year for a few months in a Masai camp, so that he or she could learn behaving.

But once again I was wrong. I recently discovered it is actually not necessary to send our child to Africa to teach him to behave. It is sufficient to send him for a few days to Paris at Constance’s.

Leonardo just came back from Paris a few days ago, and while before leaving he was somehow naughty, often whimpering when we put him to bed or waking up during night, since he came back he seems another baby: he goes straight to bed at 9 pm without complaining or opposing resistance, he does sleep soundly the whole night, he eats everything we give him. In sum, as good as an African kid.

We don’t know what Constance did to him during his stay in Paris, but whatever you did, thank you Frau Constance - German discipline in a French cover...