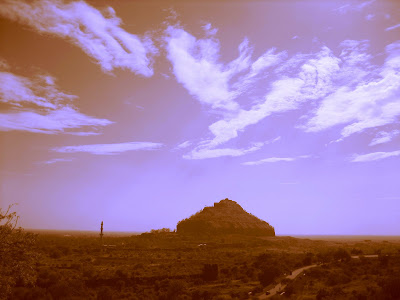 While the Ajanta and Ellora caves did certainly represent the main attractions of this trip, my favourite stop during this week-end was at the fort of Daulatabad, on our way to Ellora.

The story of this fortress is pretty bizarre.

Built through the XII century by the Yadava rulers, it suddenly became the capital of the Delhi sultanate in 1328 when the sultan of Delhi Muhammad-bin Tughluq decided to move there his kingdom’s capital. Believe it or not, the sultan forced the entire population of Delhi to march to this citadel (about 1200 Km southern!), killing part of it during the trip. However, Daulatabad soon proved to be unsuitable for a capital, and only a few years after the first move, the sultan decided to move the capital of his kingdom back to Delhi, and - deja vu - marched his population back to the previous capital.

The fortress is a masterpiece of military engineering. Secured on a solitary hill, protected by five sets of powerful walls, surrounded by a deep moat teemed with crocodiles, accessible only through a drawbridge, and defended by a series of ingenious architectonical tricks and contrivances, such as multiple doorways with odd angles and uneven steps to prevent elephant charges, loopholes from which throw boiling oil or water from above, etc.

My favourite defensive contrivance is however the Andheri (‘dark passage’), the only entrance to the citadel. The Andheri consists of a long devious tunnel that rises rapidly and tortuously by a flight of steps which are uneven in width and height, thus making them difficult to climb in the absence of light. In the complete darkness or filled with smoke, this passage was supposed to disorient and throw the enemies into confusion, leading them - through a series of turns and twists - to a trap: a passage that would have made the intruders tumble down to the moat.

We experienced the thrill of going through it. In a way, it has been like going through the ‘horror tunnel’ at the funfair. In the complete darkness (no electric lights have been added to maintain the original setting) we groped our way with a multitude of bats skimming over our heads, and the noise of mice (rats?) squeaking in between our feet.

The fort was considered impregnable. Ironically, however, history records that the fort was once successfully conquered by simply bribing the sentinels on guard at the gate…