The Sun Behind The Clouds 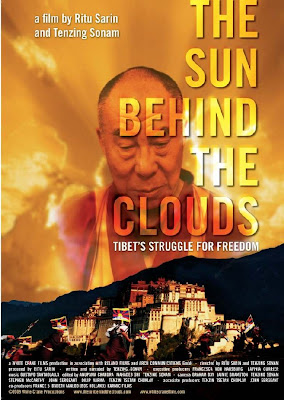 One of the little advantages of living out of Europe and out of the US is that, from time to time, you end up watching a movie that will never reach the international circuit, and that therefore you would never have had the opportunity to watch otherwise.

Today we happened to watch “The Sun Behind the Clouds”, recently awarded at the Mumbai International Film Festival. The film tells the struggle of Tibet for freedom, and presents, in a very balanced way, the different views and positions among Tibetans regarding Tibet’s independence: from the Dalai Lama’s ‘Middle Way’ to the more radical positions of the new generation and of certain activists. What emerges is a complex picture, and the tensions, contradictions and dilemmas between the role of the Dalai Lama as spiritual but also political leader, between ideals and political reality, between justice and pragmatism.

We went out of the auditorium where the movie was shown flooded by mix feelings: the admiration for the strength and passion with which these people persist in their struggle for freedom, the compassion for their sufferance, the anger for the injustice, the sorrow and the sense of impotence for what we believe the fate of Tibet will eventually be...

We are afraid that most of you won’t have the opportunity to see this movie. But if, by any chance, you’ll end up having this chance - well, we certainly recommend it.