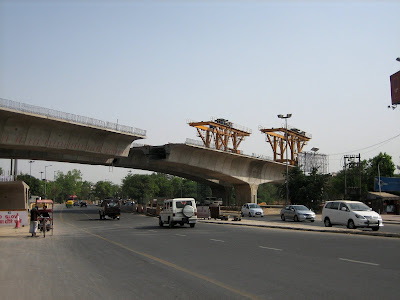 I still remember as it was today my first conversation with an Indian here in India: it was with the taxi driver that brought me from the airport to the hotel*.

During the ride to the hotel we discussed a bit about all the things you can’t avoid discussing with a taxi driver the first time you arrive in Delhi: the traffic, the Commonwealth Games in Delhi in 2010, and the metro under construction.

Particularly with regard to the metro under construction, the taxi driver kept on proudly pointing at something in the middle of nothing during the whole trip, repeating “Delhi Metro, Delhi Metro. Commonwealth Games, Commonwealth Games” - which I interpreted as ‘That’s where the Delhi Metro is being built; it will be ready by the Commonwealth Games’. However, despite all my efforts, I couldn’t see anything beside a few half-finished cement pillars here and there.

For a person that grew up in Milan in the 80s and 90s under the refrain of ‘la linea 3 che avanza’, to see three cement pillars still under construction and to think that a metro system should be ready and functioning in less than one year seemed the usual example of political propaganda. You (politician) commit to build a physical infrastructure (a metro in this case) and present a plan and a budget. The plan is approved, and thanks to this your city gets the ‘big international event’ (the Commonwealth Games in this case) assigned. Public funds are allocated and you start the works. However, after a while, for a reason or another, the works get delayed, the budget turns out to be insufficient, people start realizing that the metro will never be ready for the due date, and, in short, the works are stopped (or procrastinated forever), blame is given to nobody, and public opinion ends up accepting this failure as another case of bad politics (but in the meantime funds have been allocated - and spent, the city got the Games assigned, and perhaps the politician has also managed to be re-elected).

Anyway. During the weeks that followed my arrival it happened to me a few times to discuss the issue with my Indian colleagues. But every time I expressed my doubts on the fact that the metro would have ever been finished on time, my colleagues answered back, almost offended, that I didn’t know the Indians, that it is always like this, that things seem always late but in the end everything is completed on time.

Whatever. I didn’t mean to open a debate on this. It was just to chat about something. And certainly we, Italians, have nothing to teach to the rest of the world on this subject.

Weeks and then months went by without anything, apparently, happening. To the point that I completely forgot it.

And then, suddenly, almost overnight, the various cement platforms that for months had remained perched on the pillars scattered over Delhi began to connect each other - and the idea of metro to finally take shape, as the image of a jigsaw puzzle that is finally being completed.

It’s June 2nd today, there are still four months to go before the Commonwealth Games start - which can be a lot of time or very little. Anyway, whatever it will happen, either that the metro is completed on time or not, Delhi earned my admiration: here the Metro continues advancing. 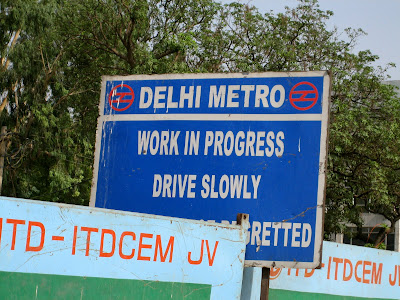