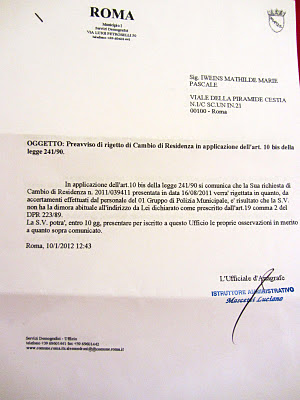 I presume you probably thought that, with my visit to the urban police station in early December, our ‘change of residency saga’ had happily ended. And so did we.

So you can imagine how we felt when, today, we received the above letter that, in summary, says that our request for changing residency was rejected because, as per urban police’s verification, it resulted we were not living where we declared to.

But what the hell - you would say - didn’t you go to the urban police station? Didn’t you produce evidence of your residency? Didn’t they clear your case?

But as in all self-respecting soap operas, as for all successful tv series, you need to find a way to keep the series going.

And so our change of residency saga continues. Until the next episode. Do keep on following us…