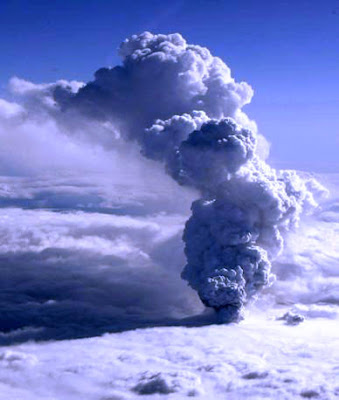 In the era of globalization, even a volcano eruption in Iceland, almost 8,000 km faraway from Delhi, somehow ends up affecting our lives.

Mathilde was supposed to leave tonight to DC to attend the CI Center for Conservation and Government’s Annual Meeting on the Lufthansa flight DEL-FRA-IAD. However, as you all know, all the airports in Europe are temporarily closed because of the ashes of this volcanic eruption, and all the flights from India to Europe are cancelled until at least Monday.

For those who well know Mathilde, you can easily imagine how she reacted this morning when she was informed that her flight was cancelled (‘no panic, no panic... ok: panic’*).

However, arguably one of the qualities of Mathilde is that she never gives up. And so, after three hours at the phone with the poor Sanjay, one of the operators of www.makemytrip.com, during which they went through all the possible routes that could possibly link Delhi to DC (with the poor Sanjay that was repeating ‘no possible, no possible’), she finally found probably the only itinerary to DC that is not affected by the effects of the eruption of the Eyjafjallajokull: Delhi-Dubai-Manama-Kuwait City-Washington DC (with three different carriers: Emirates, Jet Airways, and United).

Mathilde will be leaving on Monday and will land in DC on Tuesday morning, right on time to attend the second day of the annual meetings. Hoping that in the mean time the ashes of the Eyjajallajokull will not reach the little Kingdom of Bahrain as well...

(*) Does anyone recognize the 'erudite' quotation?