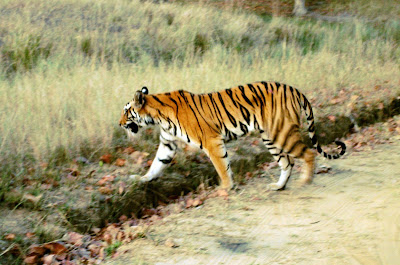 Eleven tigers (two cubs) in two days, some of which so close that we could almost stroke them.

The two topical moments on Saturday late in the afternoon. First, when four tigers coming from four different points converged almost where we were. One of them passed just aside our four wheel drive, not further than four/five meters from us - we could feel its stomach's grumbling (and Mathilde’ shaking knees)... Thrilling!

The second one when, on our way out of the park, we saw by chance two cubs hanging on a rock just above us. We could have literally touched them! The two cubs didn’t seem overawed at all by us. On the contrary, they seemed enjoying to pose for us... Divas!