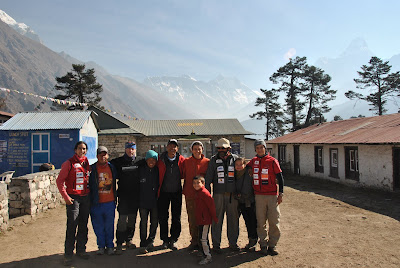 Delhi is like a seaport: hard to believe it, but it seems that everyone, sooner or later, passes by here.

On Saturday we hosted Paola, on her way back from Nepal to DC. For once not on an official World Bank mission, Paola was in Nepal to unofficially participate to the ‘Epopeya Everest sin Limites’, a Colombian expedition led by her husband Juan Pablo whose main objective is to bring for the first time a man with an artificial leg on the top of the Everest (without oxigen)*.

The story of Nelson Cardona, the man with the artificial leg, is quite impressive. He had a mountaineering accident four years ago, while he was training to climb the Everest. His leg was so seriously injured that the doctors gave him two options: to either keep it, but without the possibility of bending it and therefore of climbing anymore, or to amputate it, but keeping the possibility of climbing with an artificial prosthesis. Nelson was extremely divided, but he finally made his choice, and today he’s trying to fulfil his old dream.

Paola (and Simon Pietro and Antonia, her six-year-old child and eleven-year-old stepdaughter) reached the Base Camp (5,100 m) before taking leave of the rest of the group and returning to Kathmandu, and then to DC, via Delhi.

Their stories and pictures tickled my fantasy: who knows if one day...

(*) Have a look at their blog: http://www.epopeyaeverestsinlimites2010.org/