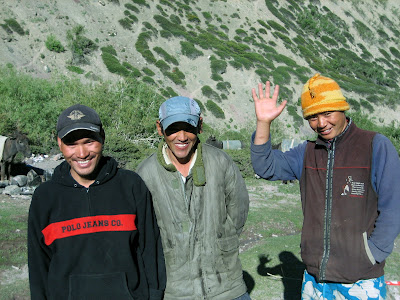 We haven’t yet ‘officially’ introduced you the team that loyally accompanied us during our trek in Ladakh. Let us make up for our shortcoming.

First of all Pemba (on the left side), our guide: a Sherpa from Nepal who comes to the Indian Himalayas from May to September to cover the slack (rainy) season in Nepal. Attentive and caring, we can say he has been our guardian angel for two weeks. And for those that do not know it (us included until this trip), ‘sherpa’ does not mean ‘porters’, as most of us erroneously believe. In fact, the Sherpa are an ethnic group and highly regarded cast of the Nepalese mountains. Chapeau.

Then Pemma (on the right), our cook. He surprised and spoiled us by changing menu every day: from the classical rice and dahl, to various Nepalese and Tibetan delicatessen, to french fries (!), plum-cakes for breakfast (!!), and (once) even a chocolate cake (!!!) (we never understood how he managed to bake it). But more than his delicacies, what literally astonished us was that he managed to bring two cases of fresh eggs along the trail without breaking a single egg. He never revealed us how he did...

And last but not least, Dorge (at the center), the donkey-man. Always cheerful and smiling, it seemed he was enjoying the trekking as much as we did. Interestingly, in the end he covered twice the distance we covered, as he spent half of the time chasing the donkeys that were running away at every occasion. 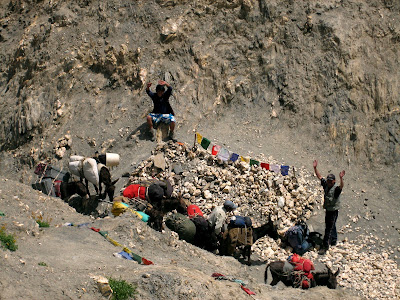