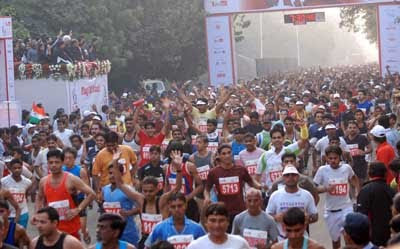 When, just after the eighth kilometre of the Delhi Half Marathon I turned left from Mansingh Road into Rajpath (the boulevard that runs from the India Gate, the All India War Memorial, to Rashtrapati Bhavan, the official residence of the President of India) and I suddenly saw that imposing palace in front of me, enlightened by the early morning light that dissolved the Delhi’s November morning mist, my heart leapt - and that image is one of the images of India that will be stuck in my memory and that I will bring with me forever.

Truly, the Delhi Half Marathon somehow made me make peace with Delhi.

I have never hidden that I have never been too fond of Delhi. Too big, too chaotic. Too dusty, too polluted. Too overwhelming. Too hot for nine months and too cold for two. I have never been as sick as in Delhi: terrible colds, flues that knock you out, stomach and intestine infections. I was only lucky not to get dengue or other vector-borne diseases... In short, not my city. And not too sad by the idea of having to leave soon...

But this run in the crisp air of a November morning, among the tree-lined roads of southern Delhi - for once closed to the traffic - with the sun that first shyly and then more overbearingly warmed up the city, made me observe Delhi from a completely different, perhaps deceiving, angle. And it's like if I have re-discovered it.