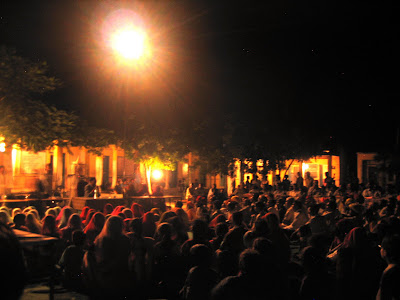 “Mr. Matthew. Have you ever attended a Gram Sabha*?” asked me the District Collector** at the end of our meeting at 6 pm.

And before I could even think to an answer I was in the Collector’s car running in the dusk towards an unknown village in the Pali District, Rajasthan...

Several of you asked me more than once what exactly my job consists of, and - I admit it - I have always been rather sparing of details.

Let me however take this opportunity - my recent trip to Rajasthan to discuss with some local authorities and village representatives about a project I am currently working on - to give you an example of the kind of things I do...

In order to reduce poverty and unemployment in rural areas, the Indian Government has issued a few years ago an act which guarantees rural households the right to be employed for at least 100 days a year. A kind of unemployment subsidy - but slightly different. Basically, if a rural poor ends up being, for any reason, unemployed in the course of the year (for instance because of a drought or because the labour market is stagnant), he or she has the right to go to the local authorities and be hired for (up to) 100 days.

To do what? Usually these people are engaged in labour intensive public works, such as the construction of water conservation and water harvesting structures, flood control or small-scale irrigation facilities, feeder roads, afforestation activities, etc.

This employment guarantee program was so successful during the first years of implementation that the Government decided to extend it to the whole country. Today the program covers all 615 rural districts in the country and employs more than 52 million people per year. About 0.5% of the GDP (mica bruscolini) is invested for the implementation of this program every year. Indeed, it’s a massive program, probably the biggest social protection and rural employment program in the world.

Now, two observations can be made looking at this program through ‘climate lenses’, the lenses that I am supposed to wear. First, several of the activities supported by the program, such as the construction of water conservation and harvesting structures, tree planting, etc. do actually contribute to reduce the vulnerability of rural people to the effects of climate change (i.e. uncertain or low rainfalls, floods, etc.) - even though the program was not deliberately designed for this purpose. For instance, the construction of water conservation structures may allow farmers to bear longer dry seasons. The construction or the reinforcement of river banks may prevent or reduce the risks of floods, and so on. At the moment these public works are undertaken simply to provide an employment opportunity to rural people, without really taking in consideration the possible effects of climate change. However, if properly planned, these activities could actually contribute to reduce the vulnerability of villages and communities to climate change.

The second observation that can be made is that the durability of the assets built through this program is often limited by the fact that their technical design does not take into consideration the potential effects of climate change. Imagine for instance the cases of a rural road that is severely damaged by heavy rains or of a bridge that is washed away by a flood because their design did not factor in the fact that there would have been more frequent or more intense rainfalls as a consequence of climate change.

It may sounds a bit cryptic, but let me explain. With our work we basically try to do two things. First, to increase the awareness of local communities on the future impacts of climate change and their capacity to select and plan interventions that reduce their vulnerability to the effects of climate change - for instance, more water harvesting structures if the length of the dry seasons is expected to increase, or more river embankments and flood control structures if more floods are expected, or more efficient drainage systems if more precipitations are expected, and so on.

Second, to support the review and revision of the infrastructures’ technical standards to ensure that the new constructions take into consideration the likely effects of climate change: higher banks if more floods are expected, more resistant roads if heavier rains are expected, and so on.

This is an example of one of the projects I am working on. Interesting, isn’t it?

After a few hours driving in the dark on the bumpy roads of the Pali District, Rajasthan, we finally reached this remote village, whose name and location will remain unknown to me, where hundreds of people were waiting the Collector to start the Gram Sabha. And to start discussing which activities should have been included in the work-plan of the village for next year…

(**) A District Collector is an officer of the Indian Administration placed at the district level in charge of handling law, taxation and revenue collection, planning permission and natural emergencies. 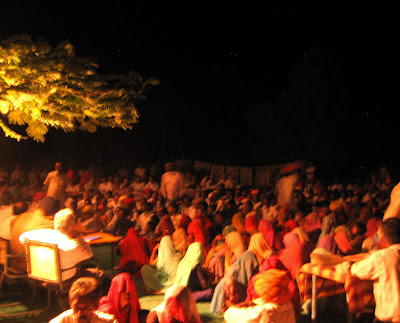