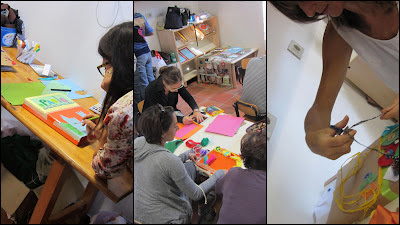 At the beginning there were no major problems. On the contrary, it was interesting to observe from a corner in the classroom how your child familiarizes himself with the new environment. But after a while, when the time in which the parents had to wait outside the classroom had significantly increased, it became quite boring to have to wait one-hour/one-hour-and-half outside the classroom, always on the alert, before being called again.

To kill the time the teachers gave us a task: we had to decorate the cover of our children’s notebook - the notebook in which all the pictures and works that our children will carry-out during the year will be collected. We were sent to the childcare workshop, and, armored with scissors, tape and glue, and using all the materials we wanted - coloured papers, paperboard, fabrics, seeds, woods, leaves, buttons, and anything else we could think about - we started our homework.

And have to say it has been great fun: most of us (myself included) have not done anything similar since our times at the primary school, and - in a way - it was as being back children again.

And, to my own surprise, we had plenty of talent and creativity!