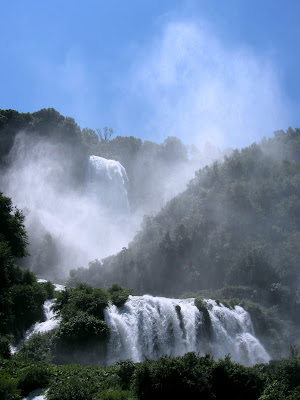 “The roar of waters! From the headlong height Velino cleaves the wave-worn precipice. The fall of waters! Rapid as the light, the flashing mass foams shaking the abyss. The hell of waters! Where they howl and hiss, and boil in endless torture, while the sweat of their great agony wrung out from this their Phlegeton, curls round the rocks of jet that gird the gulf around, in pitiless horror set. And mounts in spray the skies, and thence again returns in an unceasing shower, which round, with its unemptied cloud of gentle rain, is an eternal April to the ground, making it all one emerald. How profound the gulf! And how the giant element from rock to rock leaps with delirious bound, crushing the cliffs, which, downward worn and rent with his fierce footsteps, yield in chasms a fearful vent to the broad column which rolls on, and shows more like the fountain of an infant sea tom from the womb of mountains by the throes of a new world, than only thus to be parent of rivers, which flow gushingly, with many windings, through the vale…”.