The biggest democracy in the world? 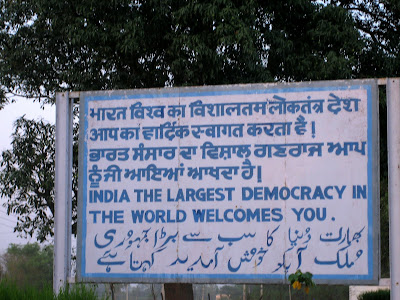 Since my arrival in India, I have been bombarded by this slogan: ‘India, the biggest democracy of the world’. Which, telling the truth, I always found a bit annoying.

It is certainly true that if we consider ‘democracy’ merely the ‘electoral system’, with more than 700 million people that voted during the last national elections in 2009, India is the largest democratic country in the world. But this to me is not a merit. This is simply the consequence of the fact that India is the second most populated country in the world, and that the first one, China, with a single-party electoral system, cannot be technically considered a democracy.

But if we look at the concept of democracy more broadly, we notice that Indian democracy has plenty of flaws.

India is a country where the cast system still exists (to the extent that a question on which cast people belong to was about to be introduced in the questionnaire for the next census) - and, no wonder, where the majority of the political class belongs to the highest casts. India is a country where, despite the fact it was probably the first country to have a woman as prime minister, women are highly discriminated - and certainly cannot properly exercise their democratic rights. India is a country where, with more than half of the population living in poverty, most of the people do not have the means (access to information, education, time, etc.) to properly take up their democratic rights. Technically all these people - those belonging to the lowest casts, the women, the poor - have the right to vote. But is this enough to consider India a democracy, or - better - the ‘biggest’ democracy in the world?

But even considering democracy in the narrowest sense, i.e. the electoral system only, I found disturbing the rhetorical and populist use of this word in India, as - as I said earlier - anything comes second to the fact that we (they) are in a democracy. I truly believe that organizing a 1.2 billion people country with profound cultural, ethnical, religious, and linguistic differences democratically is indeed commendable, and I admire India and the Indians for having achieved that. But being a democracy should be a means to achieve the highest good, and not an end in itself, to praise yourself in front of a mirror.