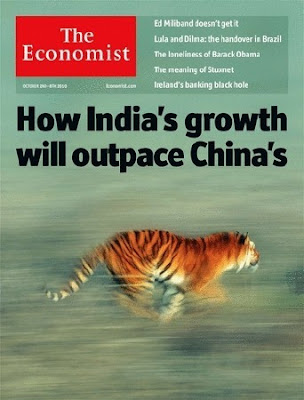 A few weeks ago the Economist published an article stating that India’s growth would have soon (by 2013 if not earlier) overtake China’s. This forecast was based on two main arguments. First, the impact of the two countries’ different demographic trends on their economies. According to a study by Morgan Stanley quoted by the Economist, China’s workforce will in fact soon age and shrink - mainly because of the effects of the Government’s ‘one-child’ policy - while on the other side India will benefit for many years from an opposite trend: a young and growing workforce. Second, the comparative advantage of India’s democracy vis-à-vis China’s single-party, authoritarian Government – which, according to the Economist, favoured and will continue to favour business development in India.

I often shared the Economist’ smart and wit analyses, but, even though I don’t consider myself an expert of India (let alone of China), this time I tend to politely disagree – if not with the conclusions of the article, at least with the arguments used in support of the thesis.

Demography. I don’t have the elements to contradict the demographic projections of India and China quoted by the Economist - so I assume these are correct, and that in fact demographic growth will be a factor in favour of India’s growth. But my immediate question would be: what would this young and growing workforce do? How will it be absorbed by the labour market, considering that half of India’s population live in poverty, and thus have limited access to education and limited economic opportunities? I am not saying that the young and growing workforce does not represent an asset for India, but I think that to exploit this asset a number of structural changes need to happen – and these will not happen in the short-run. Certainly not by 2013.

Democracy. I sincerely believe that the weight that has been attributed to democracy as a critical factor for economic growth in India is overestimated. I can’t see what specific, concrete advantages in terms of economic growth being a democracy bring to India. The economic literature, including the Economist, often quote the abolition of the ‘licence raj’ (the set of licenses that were required by the Government to set up and run a business in India) in the 90s as the measure after which Indian economy began to boom - but I can’t see why this could have not happened in a non-democratic India as well. On the contrary, the example of China (and the Economist acknowledges it) seems to demonstrate that rapid and shared economic growth is possible even in non-democratic and authoritarian systems. In general, I think that the emphasis given to the concept of democracy in India (‘India, the biggest democracy in the world’) in every sector, including - as in this case - economy, is rather demagogic and rhetorical – but this would be perhaps the subject of another post.

At the same time, I think that the article overlooked or underestimated a number of other factors that on the contrary may prevent or constrain economic growth in India.

First, the fact that India has a very poor infrastructure system, e.g. bad roads, slow railways, limited and unreliable access to electricity, etc. Infrastructure development is commonly considered a necessary condition for large-scale development, and Indian infrastructures are objectively in very poor conditions. The Economist maintains that India’s growth will be based on a ‘knowledge-intensive’ industry, which requires fewer infrastructures. But beside the fact that even a knowledge-intensive industry needs reliable access to electricity, a functioning telecommunication system, etc., the counter-argument is that to have a ‘knowledge-economy’ a country needs to have a highly educated population – and India, with still one third of its population illiterate, seems far from fulfilling this condition.

Second, widespread corruption, which drains public and private resources, and adds costs and reduces competitiveness of the private sector.

Third, poverty. With more than half of the population poor, the costs of any social security system will necessarily divert a significant amount of resources that could be otherwise used for more productive purposes.

To conclude, will India’s growth outpace China’s? I sincerely don’t know, and I don’t have the elements to hazard either a ‘yes’ or a ‘no’. But if this will ever happen, it will hardly happen - in my opinion - in the time-horizon predicted by the Economist.